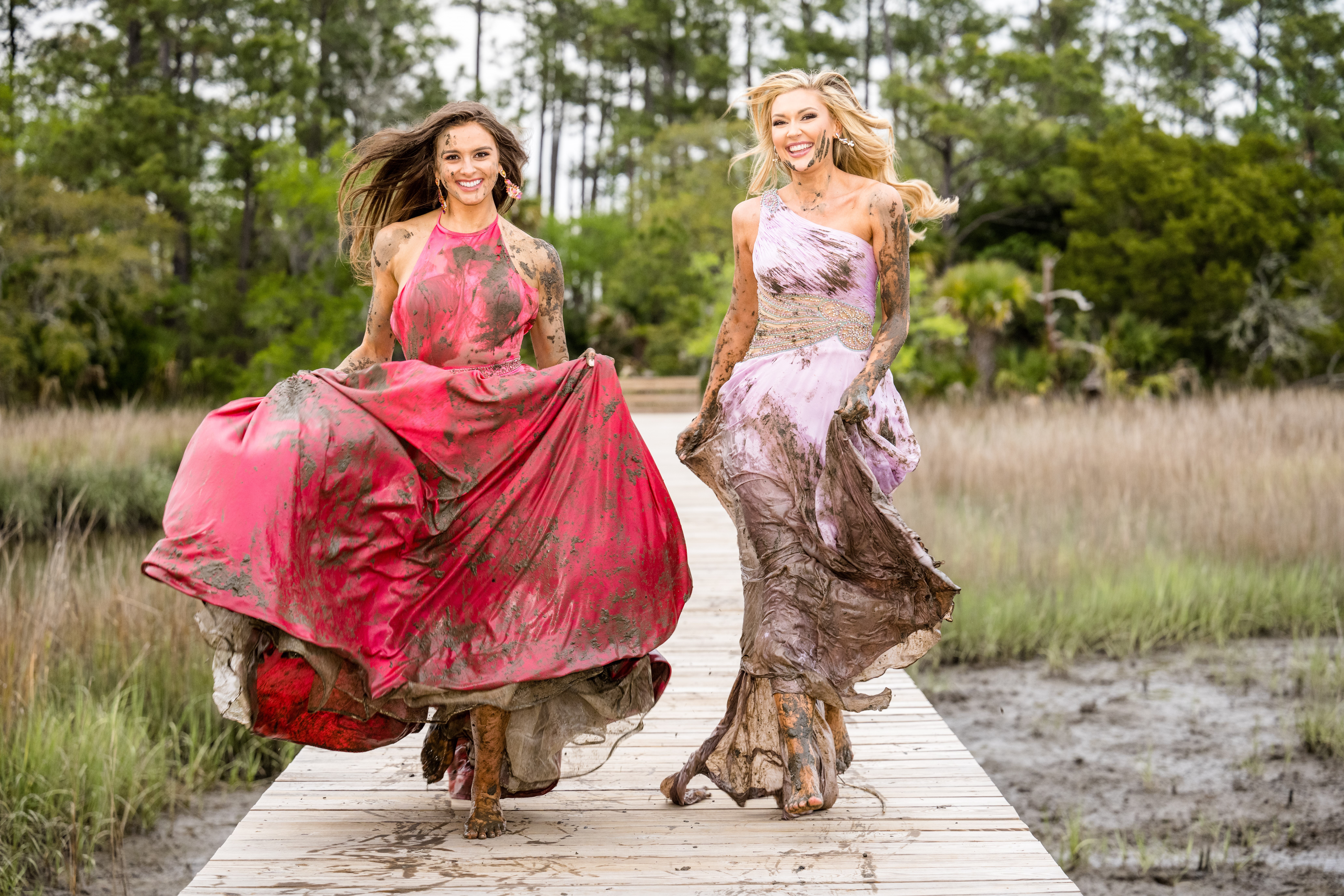 It's every kid’s dream – to play in the mud in their Sunday best, but is this something adults would want to do?  We asked both Madison Bryant, Miss North Carolina USA, and Marley Stokes, Miss South Carolina USA, if they would be willing to wear a formal gown while playing in the mud, and they both said yes.  Seriously.

In 2010, Shores met the reigning Miss North Carolina USA, Nadia Moffet, when she asked us to restore the evening gown she wore in the Miss USA Pageant in Las Vegas; it was heavily soiled from stage debris and cosmetic products.  Our staff was so impressed with her that they contacted Paula Miles, Executive Director of RPM Productions, the organization that runs the pageants for both North Carolina and South Carolina.  Over the years our involvement with Miss NC-USA has grown, and during a recent brainstorming session, the idea of muddying a formal dress was born.

It seems we weren’t the only ones with such a crazy idea; Madison had casually suggested the same idea during a group conversation.  When Paula shared that they wanted to do a photo shoot in conjunction with Shores with the muddy the gown concept, Madison was incredibly excited.  “I was raised as an athlete, and I loved playing in the mud as a kid,” Madison explained.  “The shoot was done in a marsh in the Charleston area.  I got all made up, put the pink gown on, and jumped right in the mud before the plan was even laid out.”  I surmised that perhaps Marley wasn’t as keen on the concept initially.  “I had a blast,” said Madison, “but I think Marley was a bit spooked in the beginning.  She found the joy eventually.”

If you know anything about marshy areas around Charleston, not only are they wet, soupy, and muddy, especially after the rainy season, they are also filled with alligators, mosquitos, and pests.  Plus, they can be on the stinky side.  Both contestants found their inner child engaging in mud fights, rolling in the mud, and smearing it on each other’s faces.  I think it’s fair to say that they both had a great time. Once they were far past dirty, heading toward filthy, the photo shoot began and lasted well into dusk. 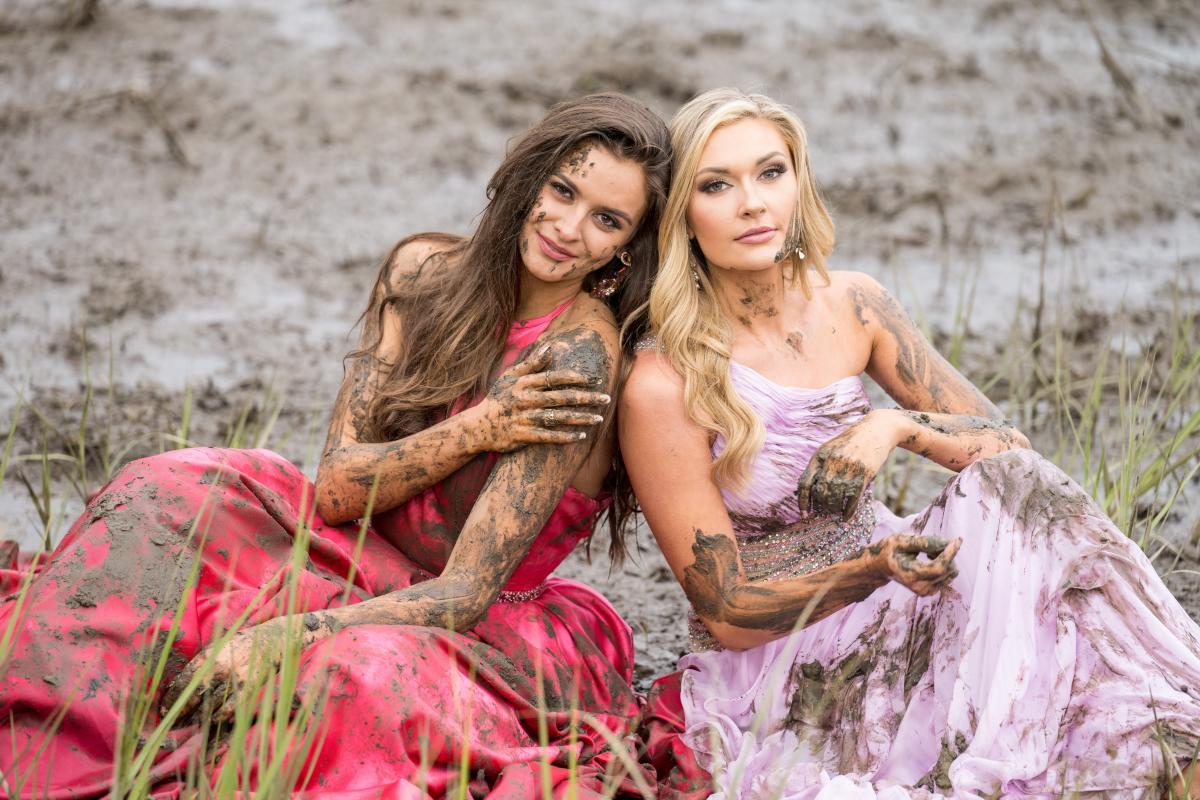 Cold, wet, and covered in mud, both ladies needed help getting out of their dresses.  According to Madison, formal gowns that have soaked up a bunch of water and that are covered in mud are quite heavy.  Forbidden by the owner to enter the house where they were staying until most of the mud was removed, both ladies had to be washed off outside with a garden hose before heading inside to a real shower.  “We felt like kids,” shared Madison.  “And afterward the two of us sat down and had dinner together.  It was one of the best times I’ve had during a pageant event.  Marley felt more like a friend and a sister as opposed to a competitor.”

Pageant staff did their best to rinse some of the mud off both gowns and placed each one in their own plastic garbage bag.  They must have smelled pretty bad, because the transporter insisted they be double bagged before being placed in her car.

Every gown has its own story.  While most aren’t worn in a low-country marsh by Miss North Carolina, each one is unique and requires a special plan to return them to like-new condition.  Almost 1,000 gowns a year are entrusted to Shores Fine Dry Cleaning for restoration, cleaning, or preservation because specialists, like David King of High Point, have the expertise to develop individual strategies for each gown.  When David received the gown, roughly 75% was covered in salt stains and mud.  “I begin every restoration and cleaning by carefully investigating the kinds of damage the item has encountered.  We knew the gown Madison wore had been exposed to a salt marsh, so obviously we were going to be dealing with damage from water, salt, and mud.  That type of damage, especially the mud, requires specific spotting agents that remove tannin stains.  It took several hours of spot removal before we could even begin the general cleaning process,” explained David.  “We just methodically addressed one area at a time, using a cotton swab and spotting agent formulated to breakdown earthy-type tannin stains, taking care to only lift away the soils and not the color of the gown.”  Once the salt and mud stains were successfully flushed from the satin, each layer was gently rinsed then the dress was wet cleaned then hand finished using steam. 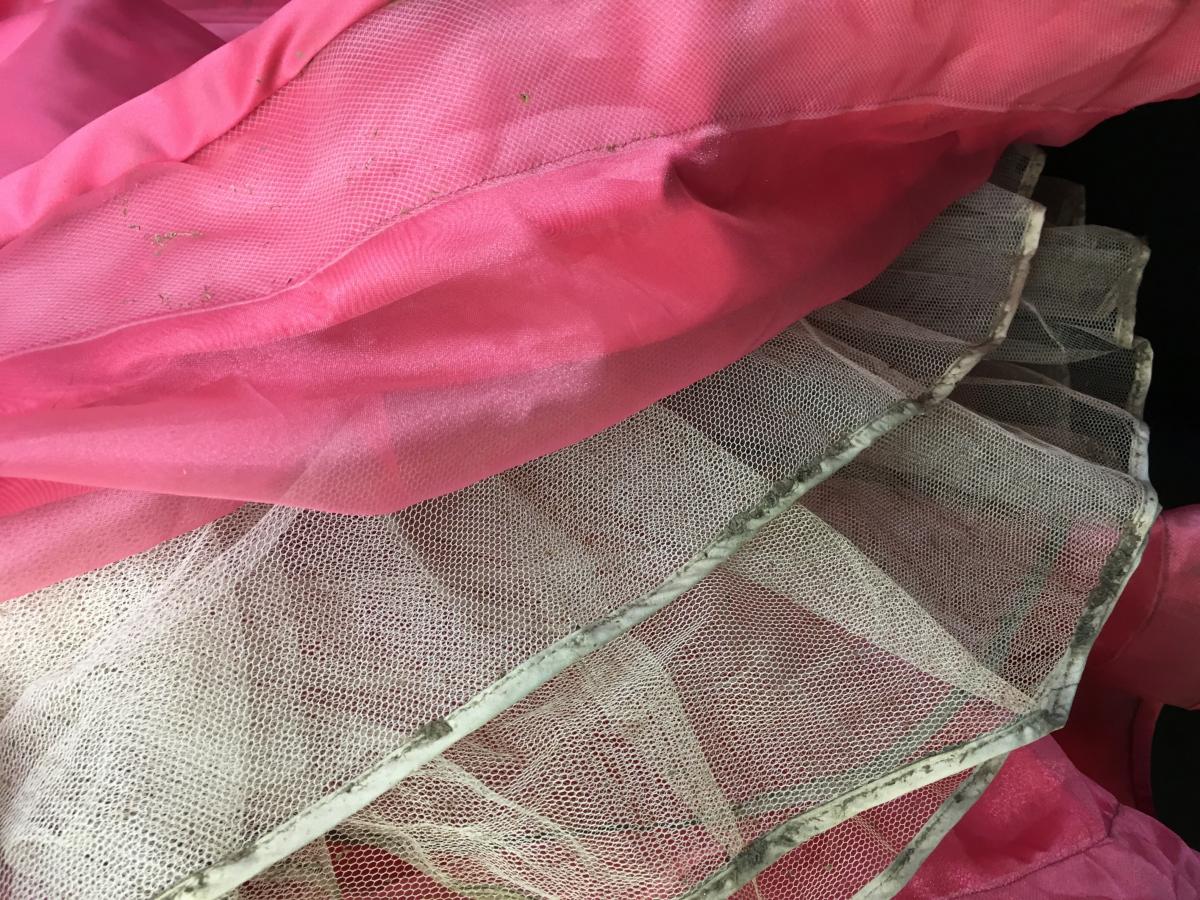 On a positive note, there were no rips or tears from the shoot, but Shores does have two very capable seamstresses on staff if there had been.  “We don’t typically see dresses this bad,” shared David, “but many gowns from weddings, proms, evening events, and pageants arrive in rough shape.”  David and his staff frequently tackle incredibly dirty, almost black trains; grass stains; beverage stains; heavy makeup stains; and tears on all kinds of delicate fabrics.  David said the muddy pink dress is back to pristine condition and is currently on display at our Winston-Salem location.

"When Miss North Carolina USA arrived back from the photo shoot drenched in Low Country Pluff Mud, I wondered how in the world Shores Dry Cleaners would tackle such a job,” exclaimed Paula.  “If you can get those kinds of stains out of an evening gown, then there is little doubt that there is any job they can't handle.  The gown looks brand new and ready for the next prom or pageant!  I'm amazed and so very happy to call them our dry cleaners!"

“When I was challenged with the task of trashing the dress, I made the conscious decision to try to make the dress irreparable,” added Madison. “After Shores cleaned the dress to look BETTER than new, I was convinced that it was a completely new gown! I couldn’t believe that the dress that was once destroyed forever, was given new life!”  A picture of the fully restored gown on display is below.

Shores took such great care in bringing this dress back to life; just imagine what great care we would take of that one-of-a-kind piece you want to bring back to life.  Do you have a wedding gown, christening gown, formal wear, or a family heirloom that needs special attention?  Just reach out through this link; we will happily answer all questions and concerns.